Well, year 2019 has just passed on the baton to 2020 and we have wrapped up the decade with a lot of technological advances. Past decade has seen a considerable phase shift in terms of technology; and I have to say Blockchain is one the biggest breakthrough that has been achieved. Although invented in 2008, industry has realised its true potential in this decade. And the question is – have we even unlocked 10% of it? I will let that question unanswered as its parallel to our area of focus in this blog, but it surely will lead us to a better view of the untapped Blockchain potential.

This blog aims at simplifying the terminologies and operation of a Blockchain and serves as a platform to understand the basic usage of Blockchain in Transaction Banking. Welcome to Blockchain explained and its application to payments.

Blockchain explained: what is a Blockchain?

A lot of my friends and colleagues have recently asked me to explain them Blockchain in the simplest way possible. So, let us start with a basic definition of Blockchain.

Blockchain, simply put, is a chain of records which are called blocks that are linked to each other with secured encryption methods. These blocks keep on growing while maintaining cryptographic information, timestamp and actual data. This feature makes the Blockchain a series of immutable records.

A Blockchain at an initial stage is a closed group of participants who agree to share data which is always transparent and known to all of them. These participants share the information on the network which is accessible by all the other participants at the same time. Thus, making Blockchain a collection or database of information chunks or blocks which are linked to each other in a secured manner. Information recorded can be of any form; It can be a simple money transfer (transaction) between two parties, an agreement for goods transfer between 2 parties, addition of police records for citizens, transfer of titles or even as small as information about one particular flavour of Ice cream for a multinational dairy chain. So, what distinguishes Blockchain from the traditional data management systems? This can be easily understood with the following characteristics of a Blockchain:

Pictorial representation of a blockchain

Now that we have defined a Blockchain and we are “somewhat” aware of the basic terms, let us move on to understand how it is useful in the world of financial payments.

Financial data is considered to be one of the most valuable data in the world. We don’t want our bank balances to be scattered over internet, do we? One such key application in Financial services that can prove to be a gamechanger if utilising Blockchain is – Transaction Banking or simply put Payment transfers.

The current model for effecting cross-border payments involves many intermediaries.

Traditional cross-border payments usually take 1 or more days to finally credit the beneficiary customer since it involves several intermediary agents. With Blockchain – it can be achieved in seconds!

A blockchain network is a meshed network. 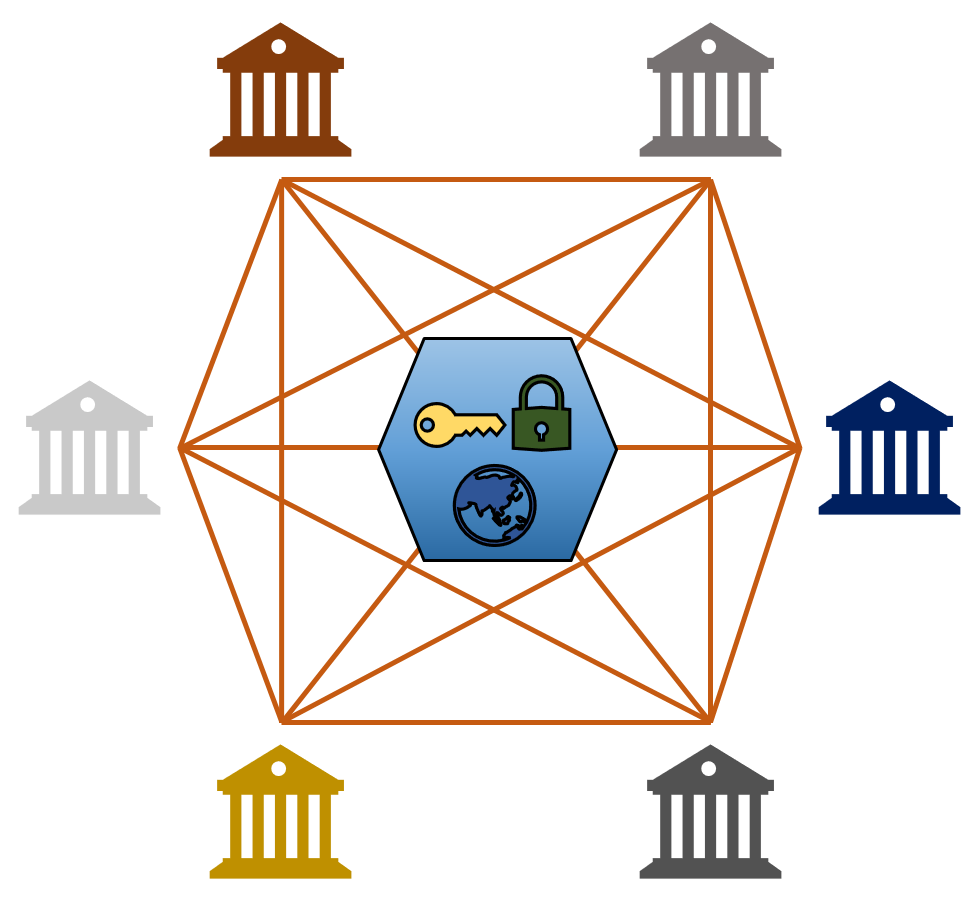 With Blockchain, each participant will be connected to the blockchain network and will be able to connect/talk to every other participant.

Now let us go a little bit further and understand how a payment will be processed via Blockchain and how it will be different to the traditional approach. In this step we will also try to shed some light on the term “Distributed Ledger”.

Distributed Ledger refers to secured, replicated and synchronised digital data that is spread across geographies (multiples countries, sites or institutions). In simple terms it means everyone on the network has a real time copy of the data and is able to witness any change on the data instantly. When distributed ledger term applies to transaction baking or payments – it refers to information related to accounts, account balances and account transactions. Now it will make more sense to imagine how a Blockchain can help achieve a distributed ledger. DLT – Distributed Ledger Technology.

Blockchain explained: How a payment would be done using Blockchain/DLT?

Let us take a simple example where Jenny form France is trying to send 1000,00 EUR from BNP Paribas, Paris to Alex who has an USD account with Bank of America, New York Branch. Using a traditional approach, this payment would ideally be sent by BNPP Paris to its Correspondent in USA which would then forward this payment BofA via the Fedwire/CHIPS system. Thus, the time taken for settling this payment would indeed be affected by the multiple hops involved in the process.

Switching on to a Blockchain, where both BNP Paribas and BofA are part of the Secured Blockchain and hold a Distributed ledger, its just a matter of new transaction being added to the chain. Now, as Jenny requests BNP for the transfer, BNP creates a record of this transaction which has details like:

Then BNP places this record on to the chain with required encryption (hash). As soon as the record is added on to the chain, its validated by each node (participant) with their key for integrity and the block is finalised. Block now contains the information that is accessible by all participants and denotes that Jenny from BNP Paris, is trying to send money to Alex who has account with BofA. In turn the receiving bank – BofA instantly initiates the accounting at their end where in customer account is credited with the required amount. Thus, finalising this payment within 5-6 seconds. 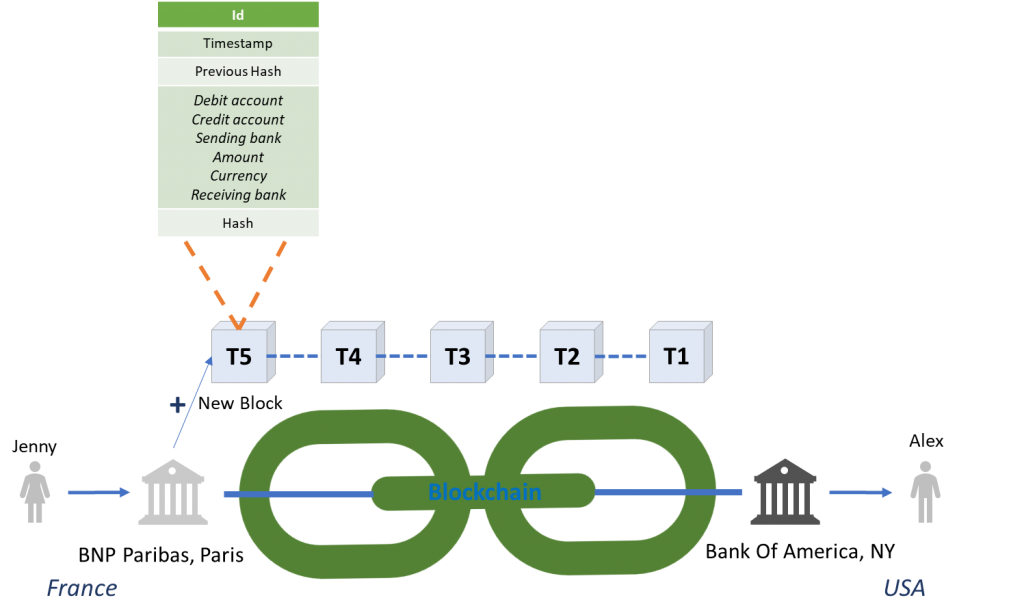 Cross-border payment through the blockchain

After a block is added, the immutable property of a Blockchain makes it impossible to alter any information on the block thus making it highly secured and uncompromised.

Talking about robustness, a Blockchain relies heavily on the underlying algorithm, which is basically the foundation that controls the complete functioning. There are a variety of different algorithms currently in market that help us build a robust Blockchain. Consequently, making a Blockchain capable of handling huge volumes easily with 100% accuracy – all this in a secured environment. Some key advantages of using Blockchain for payments are listed below:

Advantages of using Blockchain for payments

Blockchain for payments adoption has already begun with a lot of FinTechs jumping the DLT bandwagon. IBM has already introduced a Cross-Border payments solution using Stellar Protocol, called as IBM WorldWire. Major banks like Bank of America, HSBC, RBC, Rabobank, ANZ, SBI and Barclays have already planned/begun initial trials of their Blockchain based payment systems. Tech companies like Ripple Labs Inc. have already placed their Ripple protocol-based payment RTGS systems in the market. Ripple makes use of their cryptocurrency XRP to achieve a decentralised ledger.

Thus, looking at the immense potential that Blockchain has, it becomes imperative to include more and more use case for its application in different work areas. Feel free to share the different scenarios that you think can really be a great use cases for Blockchain based usage. Also, we appreciate any review comments, queries or any additional discussions that you would like to have regarding payments and Blockchain.

This article is a great contribution of Praveen Bhosale, a Blockchain enthusiast. Thank you.

13 Responses to Blockchain explained and its application to payments

Welcome to this blog 🙂 I am Jean Paul and one of my passions is payments. But that was not the case in 2007 when I joined my first payment project. I had to go through many pains and frustrations before I could really start enjoying the payment topics. You can avoid the same experience and acquire payments skills easier and faster if you follow this blog. Subscribe to the newsletter.

With this book, it is so easy to understand payments and SCT and deliver value to your clients

Get the sample for free

Get the sample for free

Get a free guide to study any payment system